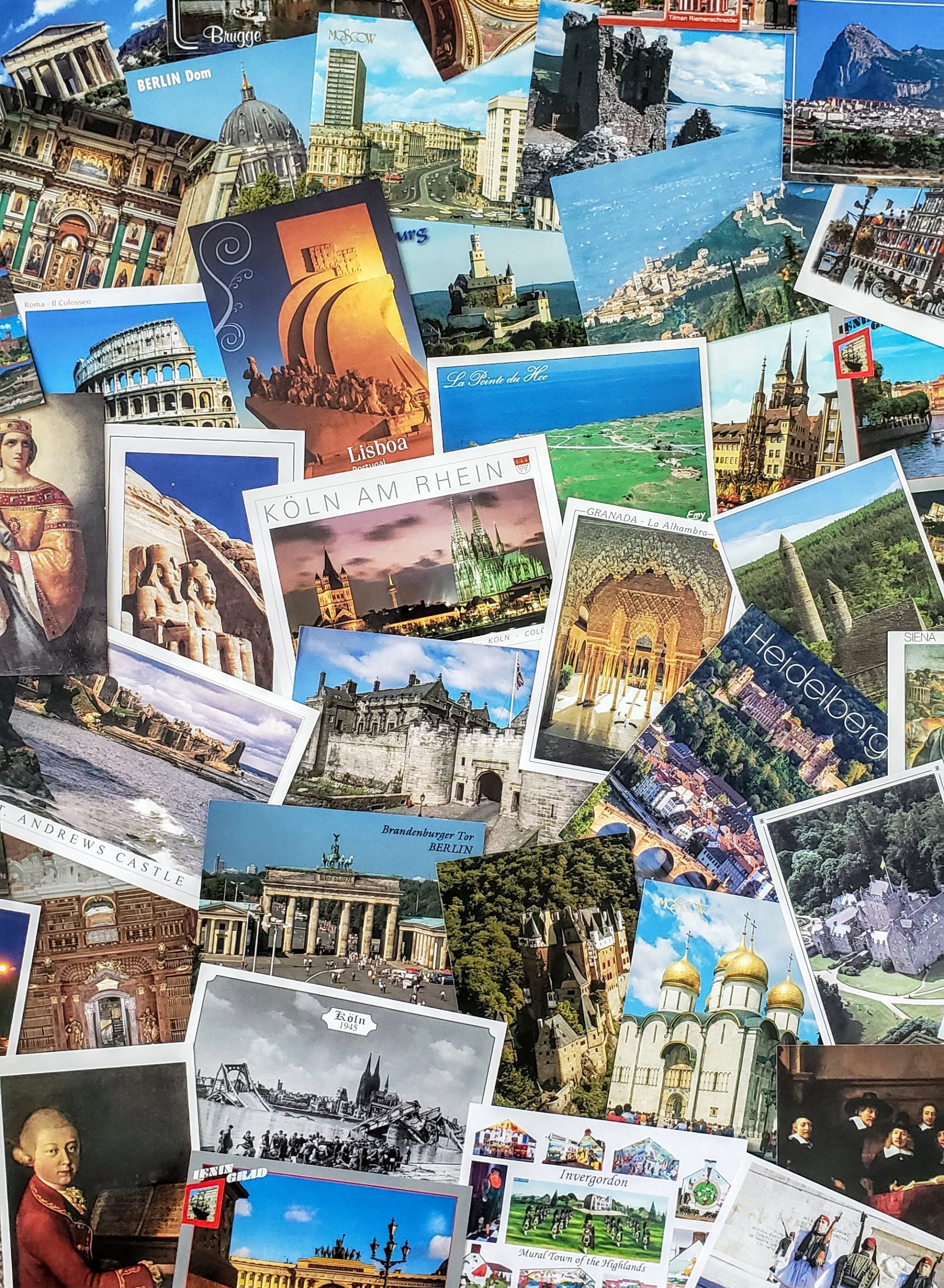 I love to travel. Many years of experience have taught me that a light load is the way to go. My souvenirs are limited to refrigerator magnets and Christmas tree ornaments. I often feel quite inadequate as a tourist when I document $5 of purchases on my customs paperwork upon my return. Likewise, my mom searches for perfect postcards. They serve as her memories of the beautiful places she has visited.

Interestingly, postcards didn’t start out as mere souvenirs. They were first developed in 1840s England as a way to send a quick message; much like an early form of texting. Government issued postcards became popular in the United States in the late 1800s until private companies began producing postcards requiring a stamp. By the early 1900s the front of the postcard became more decorative while the divided backside allowed for message space on the left and the recipient’s address to the right. Thus, began the postcard craze, particularly popular among rural and small-town women in the northern US.

Sometimes you find family history in the unlikeliest of places. A postcard appeared among the ephemera passed down from my great-grandmother Cornelia May Flansburg Nelson. The front depicted a photograph of a brick building, noted in handwriting as Chase’s Store in West Henrietta, NY.

The back had faded curly-Q handwriting, a one cent postage stamp, and an impression indicating the postcard transited the local post office the morning of Nov 30, 1907, two days after Thanksgiving. The postcard was mailed to Lucy Flansburg in Rochester, NY. Lucy was my great, great-grandaunt, sister to my direct ancestor, Charles Flansburg (Cornelia’s father). But who was the postcard from?

I distinguished the following from the faded ink of correspondence:

11.30.07. My Dear Daughter. I will come home tomorrow. If Charlie had come to the city this morning I was coming with him but he is not coming so will come in the morning. With love from your Mother.

If this was from Lucy’s mother, then this was also from Charles’ mother – my third great-grandmother Chloe Hovey Flansburg! The message makes sense. Chloe, by then a widow, lived with her daughter Lucy in the “big city.” Chloe was visiting her son Charles and his family in West Henrietta, a 20-minute drive with today’s car, but a much longer journey in a horse and buggy. Obviously, something waylaid Charles so that he was unable to bring his mother home that day. Perhaps his belly was still full from turkey dinner or, more likely, the notorious Great Lakes wind made an early arrival. Chloe walked across the street to collect a postcard from Chase’s to send Lucy a simple “text”: see you tomorrow.

This postcard is the only personal item I have of Chloe’s and is important in discovering her story. She was a literate woman who remained close to her children well into her later life. Like many others of her time, she used a postcard for a quick communique – and unintentionally left a precious genealogical souvenir along the way.