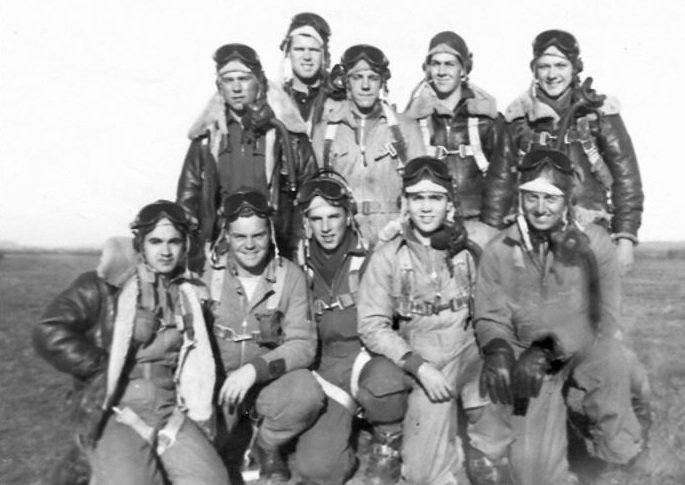 I have a family photo from Christmas in 1944 that included my cousin Dorothy and her fiancé Ed. The story great Aunt Evie told me was that Ed died when his plane went down soon after this picture was taken, which was tragic enough, but then flowers arrived for Dorothy after Ed died. My intent was to find a little more about Ed.

I started with the picture and the name Ed Brecini, looking for his name in Ancestry.com. Nothing. In early January, Ancestry.com added ‘U.S. WWII Hospital Admission Card Files, 1942-1954,’ so I looked there. Nothing. Knowing that Ed died after Christmas 1944, I searched the ‘U.S. Rosters of World War II Dead, 1939-1945.’ Again, nothing. The logical assumption was that Ed’s last name wasn’t quite right. I did a manual search of U.S. Rosters of World War II Dead, 1939-1945, and came up with many different variations of what sounded close to Brecini, like Brzezinski and Brzinski, but they were not a match.

Then I found the WW2 Casualties Database (www.ww2research.com/ww2-Casualties-Database). I searched for First Name: Ed; Last Name: Br; Branch of Service: Army/Air Force, and there he was— Edmund H. Breschini. I corrected his name in Ancestry, but still no Hints popped up, and Search didn’t give me much.

I found a 160-page document, ‘Stars, Stripes, and Sacrifice: A Wartime Familial Experience of Hope, Loss, and Grief, and the Journey Home of an American Bomber Crew,’ which is a master’s degree thesis by Darrell Hillier. It describes ‘the experiences of ten American home-front families as they negotiate their loss following the fatal crash’ of a B-24 Liberator bomber near Gander, Newfoundland in February 1945. The families include my cousin Dorothy and her fiancé Ed’s family.

The author had access to letters from Ed to his family, letters to Ed’s family from Dorothy, and personal stories from ‘The Breschini Family Collection.’ In addition, there are references to military documentation related to Ed and his crew-mates. I now know how Dorothy and Ed met and where they went on some of their dates during the weeks before Ed’s plane departed.

On February 13, 1945, the crew departed for Grenier Field in Manchester, New Hampshire. The plane made radio contact with Gander Approach Control, but the plane did not appear. The ground search for the missing plane began immediately, but there was no indication where the plane went down. On February 19, Ed’s mother received a Western Union telegram from the Secretary of War that Ed has been reported missing.

It wasn’t until mid-March 1945 that a trapper happened upon aircraft wreckage in deep snow, miles from the nearest town. The tail section was identified and all but two of the bodies were found.

Per government policy, ‘the remains of our military personnel who die outside the continental limits of the United States be interred locally until the cessation of hostilities.’ They were buried at Gander, but later the remains of all American personnel buried at Gander were relocated to the Post Cemetery at Fort Pepperrell near St. John’s, Newfoundland. In December 1947, Edmund Breschini’s remains went by Southern Pacific Railroad for burial in Salinas, California. I confirmed this information and photo in FindAGrave.com

Three months after Ed’s death, Dorothy’s doorbell rang on her birthday in May. At the door was a florist delivery boy carrying a bag containing the “most perfectly beautiful orchid,” admired Dorothy. Inside the accompanying envelope was a birthday note in Edmund’s handwriting. He had left the order at the florist before departing for overseas, expecting to be in combat when Dorothy’s birthday came around.

This really is incredible. I was looking for a little information about Dorothy’s fiancé Ed, and here is a detailed document about his death, confirming the family stories I was told by great Aunt Evie.

Beth is happily married and retired, and divides her time between playing golf, quilting, and doing genealogy research. She has been a supporter of FGS Tampa since 2018.