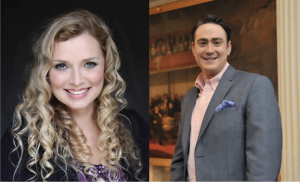 Join us as we go “Back to the Future” for our 60th Anniversary seminar and look at today’s and tomorrow’s relevant topics in family history and genealogy studies.

This event is now SOLD OUT.

CeCe Moore is an independent professional genetic genealogist and media consultant who is considered an innovator in the use of DNA for genealogy and unknown parentage research. She has been the genetic genealogy expert and scriptwriter for the PBS Television documentary series Finding Your Roots with Henry Louis Gates, Jr.  Since 2013. She is the founder of The DNA Detectives, the co-founder of the Institute for Genetic Genealogyand, as a leading educator in her field, she is an instructor for a number of courses and conferences throughout North America.  CeCe collaborates regularly with ABC’s 20/20, showcasing her cutting-edge work reuniting individuals of unknown parentage with biological relatives through genetic genealogy. She has also appeared as a genetic genealogy expert on CBS This Morning, Nightline, Good Morning America, The Dr. Oz Show, Sunday Today with Willie Geist, The Doctors and Finding Your Root

D. Joshua Taylor, MA, MLS is a nationally known and recognized genealogical author, lecturer, and researcher and a frequent speaker at family history events across the globe. Passionate about family history, Joshua is the President of the New York Genealogical & Biographical Society (NYG&B). He is also the immediate past president of the Federation of Genealogical Societies (FGS). He is the recipient of numerous awards and honors, including RootsTechs Distinguished Presenter Award, the Federation of Genealogical Societies Award of Merit, and the Rubincam Youth Award from the National Genealogical Society. In 2017, Joshua was named as one Library Journals Movers and Shakers.  The former Director of Education and Programs at the New England Historic Genealogical Society, Joshua is the author of numerous articles in American Ancestors, UGA Crossroads, FGS Forum, Association of Professional Genealogists Quarterly, New England Ancestors, and other publications. In 2013 he authored The Keane and Sheahan Families of Bridgeport, Connecticut, a study of a familys immigration and life in New England after the Irish famine. He is also the coordinator for courses at the Salt Lake Institute of Genealogy and the Genealogical Research Institute of Pittsburgh. He holds an MLS (Archival Management) and an MA (History) from Simmons College and has been a featured genealogist on Who Do You Think You Are? With Sarah Jessica Parker, Kelly Clarkson, Ashley Judd, Reba McEntire, and Rob Lowe. For three season Joshua took Americans through their past as a host on the popular PBS series Genealogy Roadshow.